Finland have been given a huge boost ahead of the off-season FIBA World Cup qualifiers as Chicago Bulls’ Lauri Markkanen will be suiting up.

The Finland Basketball Federation announced the news, which provides Finland fans with hope after a current World Cup qualifying campaign that has seen mixed results.

Finland, who currently own a 2-2 record in Group F travel to the pool leaders Czech Republic on Friday, June 29, which is followed by a home game the following Monday against Iceland.

Having Markkanen on board will no doubt provide an extra lift that the WolfPack needs.

“It’s nice to wear again the Finland jersey in front of our home fans,” said Markkanen.

“We have created memories for a lifetime during the Eurobasket games which were played in Finland and now it’s time to create some more memories.” 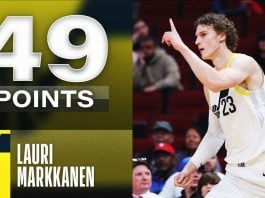