Panathinaikos have announced the signing of Serbian-Australian international center Aleksandar Maric for the next two seasons. The Greens are rumoured to have paid a massive 800K euros buy-out to Partizan to complete the transfer.

Maric had arrived to Athens yesterday at noon and went through medical tests before declared fit and signed his 2-seasons long contract today.

Maric was born in 1984 in Sydney, Australia while he is also a holder of a Serbian passport. After graduating Nebraska University he finally moved to Europe to play for Granada.

The next year he was discovered by Vujosevic who turned him into the most dominant center of Euroleague, something which attracted strong interest from almost every major Euroleague club but it was Panathinaikos that prevailed in the battle for his signature due to their connection to Partizan, Zeljko Obradovic and of course the big budget space left by the departures of Pekovic, Spanoulis and Jasikevicius.

Maric topped Euroleague index ranking with an average of 21,11 and total and offensive rebounds with 8,39 and 3,39 respectively, won fouls with 7 per game, in made free throws and attempted free throws.

The player stated: “I am excited with my agreement with Panathinaikos and I am happy to be part of the best European club with such a great history. I know what this team is all about and what it means and I also know Zeljko Obradovic. He is the king of Europe with a rich personal history as he has won everything and worked with the best players. Panathinaikos is the biggest step of my career and I will do what I did in Partizan: work hard and try for the team. And win some titles at the end of the season. 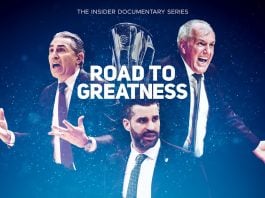