Minnesota Timberwolves was close to persue him to play in the NBA, he signed contract with Benetton Treviso and Olympiacos was “sure-thing” for Bjelica in past few weeks but at the end, his next club could be Spanish Caja Laboral.

The saga has come to an end. Nemanja Bjelica will play for Caja Laboral in next 4 years, Spanish and Serbian media are stating that this transfer is worth 7 milion Euros. Bjelica has an option to come out of the contract at the end of 2011/12 season if he decide to join Minnesota.

However, since this article has been published new information has arrived that Olympiacos has strenghten their offer for Bjelica and Lottomatica Roma has also stated their interest in the player.

Next big thing from Serbia, Bjelica (22, 210cm) can cover almost every position on the floor. He has extraordinary tecnique for a big player like him, he can shoot from every position and also can be used on power-forward, even center position.

He spent last two years in BC Crvena Zvezda and he has become valuable member of Serbia’s National team. 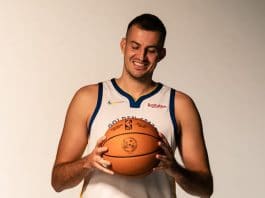