Darussafaka Istanbul reached an agreement with center Michael Eric to work together next season, the club announced Tuesday.

Eric (2.10 meters, 29 years old) arrives from RETAbet Bilbao Basket, where he averaged 10.6 points and 4.8 rebounds in eight 7DAYS EuroCup games last season. Eric started his professional basketball career with Canton of the D-League at the start of the 2012-13 season.

He also played for Frisco and Texas of the D-League, Panelefsiniakos Eleusina and AEK Athens of Greece, as well as for Enel Brindisi of Italy. He tied for fifth place in blocks (1.1 bpg.) in the 2016-17 EuroCup regular season.

An accomplished dunker, Eric will ignite Darussafaka’s crowd with his high-flying slams and blocks next season. 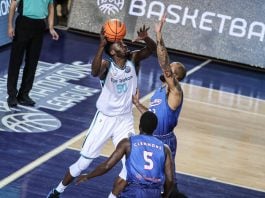