You have to know where you’ve been in life, to really get to where you want to go.

Surrey Scorchers call Guildford home and technically this season are a rookie franchise in British basketball’s top league, the BBL.

Effectively, they were born from the death of former BBL club Thames Valley Tigers, who played 17 miles down the road in Bracknell.

Franchise name changes and changes of ownership – not all happy – have followed in dizzying succession before, this summer, the club became wholly owned and immediately rebranded by the £35 million and university-housed Surrey Sports Park, which opened its beautiful doors to the public in 2010.

Popular and Zimbabwe-born head coach Creon Raftopoulos, who led the franchise with some success for three seasons from 2010-13, was also reappointed Scorchers boss, ending two unhappy and fruitless years under unpopular predecessor and part-owner Jack Majewski.

Raftopoulos says of his off-season return: “Being back here is absolutely amazing. One of the frustrations was that it took me three years to get (then) Surrey Heat into a top-four spot in the league.

“Then all of a sudden the franchise was gone and things changed. I have to remind myself that I’m not now taking off from where I left off. This is a new beginning.”

A fresh start and in luxurious surroundings, but for former Tigers fans old faces to welcome you upon BBL game-day arrival at Surrey Sports Park.

This summer game-day volunteers, who had boycotted the club during Majewski’s rule, like their now friend Raftopoulos too wanted back.

A new name then and naturally ambitious new owners, for what promises to be a tough 2015/16 campaign in an increasingly competitive and professional BBL, but founded faithfully on old fashioned values of community, trust, transparency, entertainment of course and, hopefully, sustainable success.

Raftopoulos, following a deflating 80-72 home loss in the league to Bristol Flyers, which drops Scorchers’ record to 3-3 in the middle of the 12-strong BBL pack, says: “I have to be patient, but to have a lot of our original fans and game-night volunteers come back is great to see.

He adds: “People pay their money to come and see you, and if they see you working hard they appreciate that.

Too much to do

Today at a healthily full arena, Scorchers give themselves too much to do against Flyers, who enter the contest with an underwhelming 2-6 record but are as honest as a 7ft-er is long and build a 30-21 lead early in the second quarter following a 14-2 run and a flurry of sweet threes.

Flyers captain Greg Streete strokes home the last of them from the top of the arc to cap the contest’s decisive streak.

Streete is a wonderful and understated pro, but allows himself to point a telling finger to celebrating team-mates on Flyers’ bench after making the shot. They know the significance of it.

Raftopoulos, meanwhile, burns a time-out. His team are on the ropes and Scorchers’ new – and old – fans are becoming restless.

“You can’t leave him open,” yells one frustrated supporter in reference to Flyers’ dangerous shooters.

It’s sadly too late. Flyers don’t intimidate you with either their size or a star-laden squad in the warm-up, but Greek head coach Andreas Kapoulas has a formidable basketball IQ.

Give Flyers a headstart and Kapoulas will intelligently marshall his troops to stubbornly and successfully defend it.

Scorchers, to their and Raftopoulos’ credit, do execute some stops defensively, but in transition on offence, their fast-break consistently breaks down, resulting in overwhelming pressure on their defence.

Both teams have key injuries, but Flyers react better.

Scorchers cut the gap to as few as five points, 75-70 late in the fourth, but they are forced to foul Flyers, who keep their cool to clinch victory from the free-throw line.

After the final buzzer and a lengthy behind closed locker-room doors inquest, Raftopoulos arrives out and says: “I commend coach Kapoulas. When you lose one of your best players it can be a negative, but it was a very positive lift for them. Other guys stepped up.

“Our injuries showed, but at the end of the day there are five guys out there on the floor for us and Bristol wanted it more.”

Scorchers centre Andreas Schreiber, a key summer acquisition who has played previously in LEB Gold in Spain, says: “Bristol destroyed us on rebounds and that’s partly my fault. Yes, we rebound as a team, but it’s something I have to take responsibility for.

“Bristol played hard while all the things we talked about – effort, energy, efficiency – we didn’t do.

“Talent-wise I feel we’re better than Bristol, but again effort has to be there. We can’t do anything without effort.”

Not all doom and gloom

Raftopoulos, whose accent quickly evokes his own Zimbabwe heritage, adds: “I have to remind myself that we’re a new franchise and that we have a group of young guys. It’s going to take time and we’re 3-3, it’s not all doom and gloom.

“New franchises in the BBL don’t often come out the blocks like we have. We have a long way to go and I can honestly say to you guys the media and the fans that we’re 25 per cent of where we need to be.

“We never had the luxury of a pre-season to eliminate mistakes, so it’s trial and error.”

A new American point-guard, to really anchor their offence and backcourt is on the cards, and Scorchers have injuries to big-men Schreiber and Will Neighbour.

Schreiber, for one, is upbeat about both the forthcoming campaign and the future beyond that.

The classy centre has dual Swedish and American citizenship, and like so many players has experienced the cut-throat and undignified nature of professional basketball in Europe, where short contracts are written heavily in clubs’ favour and when being suddenly cut and abandoned is an occupational hazard.

He says: “I’m having fun. It’s a great team with great people, all the way up to the top and management.

“Obviously it’s a new team but everyone’s very honest about everything. Coach is honest and if you don’t feel good you can tell him.

“That then really puts the responsibility on us as players to be honest with ourselves. I love it here.

“The court is new, the facilities are all here and Guildford’s a great place to live.

“We’re building something in the community and that sense of pride through the club. This season is a foundation.

“Coach has a very positive attitude and that’s something I connect with. Coming here was everything I thought it was going to be in the summer. I’m 28. It’s a perfect place to be.”

What most impressed me about Scorchers during my short stay was a tiny thing, granted, but it’s often the little things which make the difference, not only in basketball but life.

A two minute’s silence is called and immaculately observed for Remembrance Sunday in Britain, which rightly pays immense respect to servicemen and women who have fought and died since 1914 and the First World War.

I notice among the many hundreds in the arena that one supporter, and only one, happily and comfortably courtside, is in a wheelchair.

Game-day commentator Walker asks the crowd to stand for the silence  ‘if you are able to’. Not a big deal? It is if you’re the fan in a wheelchair.

Such attention to human detail convinces you quickly to hope Scorchers too can find and maintain long-term their happy place in the BBL.

Raftopoulos says: “To see the crowds we’re getting and the atmosphere we’re creating adds to the pressure, because I don’t like to send people home disappointed.

“That’s sport and I’m a sore loser, but I am enjoying it this year. This role is a blessing.

“You’ve been asked to be a head coach in the top league in Britain where there are only 12 teams. Don’t ever take that for granted.

“I appreciate the opportunity and I put my heart and soul into it. And I love basketball. There’s no greater place to be.” 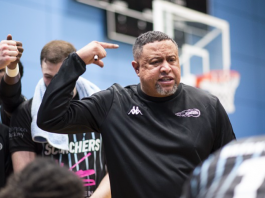 British Basketball League games to go ahead despite Coronavirus outbreak

Mitteldeutscher BC and the rise of German Basketball