Brown and Jayson Tatum combined for 68 points in the Celtics win, and the team gets back on track after snapping their win streak on Monday against the Bulls.

“Chicago was just one game,” Jaylen Brown said. “There’s going to be times where you’re going to not make shots and it’s going to put pressure on our defense. More times than not, this team’s going to play the right way.”

On Jayson Tatum listed as questionable before the game, Brown joked, “He had that game circled, he was playing the whole time. Don’t let him fool y’all.” 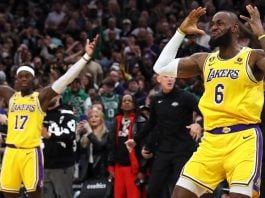