Despite missing Joel Embiid and James Harden, the 76ers prevailed at home against the Nets (115-106). Tobias Harris was the top performer for the winners with 24 points in 34 minutes of player.

The 30-year-old power forward rolled his ankle during the game, but decided to play through it and led his team in the second half. After the game he was asked about his decision to continue playing.

“I just mediated [in the locker room] for a minute and said, ‘I gotta get my stuff together,'” Harris said, per Talkin’ NBA on Twitter. “It’s like the first game that the ball’s been in my hands that many times this year, so for me I just needed to get in the rhythm and once I was able to find that flow, I just stuck with and made the right play. I think that’s the biggest thing.

“When you’re down guys, defense is going to shift over, just make the right play, get everybody feel that energy, that confidence and keep it rolling. It’s a huge win for us at home and we needed this more than ever.”

This season Harris is averaging 14.7 points, 6.2 rebounds and 2.9 assists in 33.7 minutes per game. Recently his name has been mentioned in trade rumors. 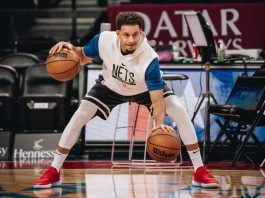