The Boston Celtics landed in a peculiar place upon the swirling news that their suspended coach Ime Udoka was reportedly a top candidate to potentially fill the coaching vacancy of the dysfunctional Brooklyn Nets. The likes of team leaders Marcus Smart and Jaylen Brown have already expressed their displeasure of potentially seeing Udoka calling the shots outside of the Beantown.

But for Grant Williams, both sides can still enjoy separate success as they move forward.

“It’s one of those things where you try your best to focus on what’s going on within your own organization, and then congratulate him because he’s personally a head coach you’ve had experience with,” Williams said, via MassLive’s Souichi Terada. “He’s going to have success wherever he goes next. For us, we know we have a great leader at the helm right now in Joe. I feel like every party’s in a good position to feel like a good future is ahead.”

Udoka, who was tapped by the Celtics to become their newest head coach last year, flipped the franchise’s fortunes around in his neophyte season. He led Boston to a dramatic rise in the 2021-22 midseason from being a mediocre team to a title heavyweight, thanks to his blunt leadership and defensive wits. Eventually, under his watch, the Cs went on to their first NBA Finals since 2010 and were two wins shy of hoisting their 18th banner.

But amid a promising campaign, he was sacked by the franchise and was placed on a year-long suspension due to multiple team violations headlined by an improper relationship with female staff. Now, the Celtics are finding themselves meshing up well with promising interim coach Joe Mazzulla at the front, who has a daunting task to fulfill by leading them back to the title stage for the second-straight year.

The Nets took a swift move upon the dismissal of Steve Nash, as several sources have confirmed that Udoka has been the main target on their radar to become a replacement. While it is not yet official, with GM Sean Marks rejecting this idea, there are now rising speculations that he will indeed take the club’s coaching helm.

As such, if Udoka will ultimately part ways with them and head on to be the Nets’ newest bench boss, Williams can only hope for nothing but success for him.

“We see him on Dec. 4 if he ends up getting the job if all the rumors are true,” Williams said, noting the date of Boston’s matchup against Brooklyn. “It’ll be good to catch up with him, chop it up. For a while, we’ve had great success with him as well, great improvements. For us, it’s just a matter of we’ve been focusing on here.

“It’s cool to see because he’s definitely somebody that you want to be back on their feet, that’s someone you spent so much close time with. To see it happen so soon, you feel even better about it. For us, it’s keeping perspective and understanding what we’re trying to accomplish with this team moving forward.” 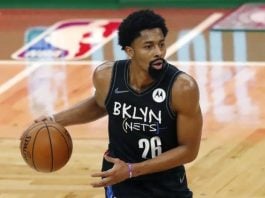