To make matters worse, the Lions had to play the majority of their encounter with leading talisman Sam Dekker, who went down with an ankle injury, mid-way through the first period.

Potential problems ahead of their trip back home to London and a league game away to Surrey Scorchers on Saturday. But Schmidt remains optimistic.

“Disappointed is a great word. I don’t think we handled the moment very well,” said Schmidt.

“Obviously, losing Sam [Dekker] hurt us quite a bit, but our lack of execution on both ends was pretty disappointing. But it is our first EuroCup game. It is a hell of an environment to play in, and we will be fine. I thought there were some times when we did some good things, but again, we have to pull a longer stretch together.”

A baptism of fire for the debutants, who are the first BBL side to participate in the EuroCup since the Guildford Heat in the 2007-08 season.

And much like the Heat’s opener away to KK Bosna, London struggled to get going, not being able to register a field goal until four minutes into the first quarter. By then, they trailed 12-1 en route to a double-digit defeat.

However, the Lions have built an extremely deep roster this season, focusing on the EuroCup. Players with NBA and EuroLeague experience, as well as Great Britain internationals, on board, Schmidt does not want London to suffer the same fate as the Heat did, and despite the blip in Tel Aviv, they will compete.

But he will no doubt sweat on the fitness of his star player, Dekker. “Everyone knows [Dekker] is kind of our offensive go-to scorer,” he admits.

“You have other weapons on the floor, but as you can tell, it was a tough shooting night. So in nights like this when shots aren’t falling, I think we shot 15% from three, to be able to have a guy who can create his own shot, missing him hurt us.” 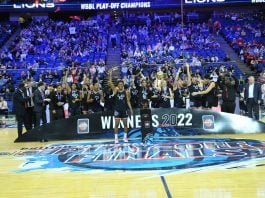