Much worse than a close loss against the league-leading Phoenix Suns on Sunday, the Sacramento Kings might have to deal the next few games with a prolonged absence of their main man, Domantas Sabonis.

As told by Kings interim coach Alvin Gentry in post-game, Sabonis will take an MRI on Monday to check the condition and damage of his left knee (per Sacramento Bee’s Jason Anderson).

Sabonis left the game with 5:03 remaining in the fourth quarter, as he slid down holding his left knee. He was feasting prior to the exit with 18 markers on 5-of-8 shooting, 12 boards, and 6 assists.

This recent injury issue by Sabonis might signal the waving of white flag for the Kings in their hopes of a possible late run for the Western Conference Play-in, as they are currently away from the picture with a 25-48 record. 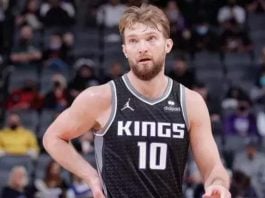