The San Antonio Spurs are preparing to hammer a big-time decision in the offseason with regards to their bid for Lonnie Walker IV. After not offering the fourth-year pro a contract extension last summer, it’ll be interesting what will be their plans and priorities moving ahead based on the minds of Gregg Popovich.

And as for Walker IV, this looming situation in his part has to be placed on the side first — as he is much focused in helping the silver and black to capitalize the remaining games of the 2021-2022 campaign.

“I am just worrying about the games, honestly,” Walker said, via Jeff McDonald of San Antonio Express-News. “I am not too worried about after the season, what am I going to do, what happens next.”

Walker IV, who was chosen by the Spurs last 2018 as the 18th selection of the NBA Draft, has been the integral cog off the bench for the historic organization all season long. Following the Derrick White trade which put Devin Vassell at the starting point, he assumed a greater responsibility as the sixth man with a hefty scoring load. Right after the trade deadline and his one-step transition for a bigger role, he is averaging 17 points while shooting 46 percent from the field in 14 games. On Wednesday, he also drained a  game-winning long bomb to outlast the Oklahoma City Thunder, 104-102, while carving up 22 markers.

While this time undeniably opens up a bigger opportunity to enhance his value, Walker IV is much happier and leaning on the blessings and basketball growth that he is currently absorbing.

“I’m getting more and more comfortable as the season proceeds,” Walker stated. “I am thankful for my coaches and (teammates). They instill a lot of confidence in me to play freely and do what I do. If it wasn’t for them, I don’t know how well I would be doing. I am thankful I am in that position right now.”

As San Antonio is currently at the 11th spot of the Western Conference, the 23-year-old swingman understands what must be brought further to squeeze themselves in the Play-in party. Indeed, he was molded by the Spurs culture which prioritizes the collective goal. 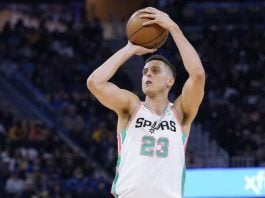