The Lakers and the Suns clashed in the first round of last year’s playoffs. Phoenix won the series 4-2. Los Angeles did not have Anthony Davis play at full strength due to a groin injury.

He played limited minutes in two games of the series and missed one game entirely. When asked if his injury was the main reason why the Suns won the series, Davis responded confidently that it indeed was. “It was … We know that. They know that … They got away with one,” Lakers star said, per Dave McMenamin.

Suns’ star Devin Booker did not agree with AD’s sentiment at all, saying that speculating what would have happened is pointless. “If if was a fifth, we’d all be drunk. If my auntie had something between her legs, she’d be my uncle,” Booker said, per Kellan Olson.

“There’s a lot of if’s in this game. And you look at history along the lines, there’s something that comes up for every team during every season. Instead of just taking the high route and going, you have to make a comment like that.”

“I actually got high hopes that Anthony Davis might be MVP”... 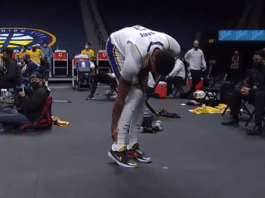