As we zoom through the month of September, it becomes especially important to recognize a struggle impacting a countless number of people. Although only the month of September represents the fight for Suicide Prevention Awareness, every day should be a reminder to us to share goodness and happiness with others around us.

In fact, this stigma of mental health shattered as athletes slowly began to share their own struggles publicly. Never once did people imagine that athletes, with all of their money and talents, could also struggle from forms of anxiety and depression.

The bravery of NBA players DeMar DeRozan and Kevin Love has set the milestone for increased mental health awareness in the basketball world.

It all started when the ex-Toronto Raptors star, DeMar DeRozan, tweeted: “This depression get the best of me…”, the day of the 2018 NBA All-Star Game.

DeMar DeRozan’s unexpected, ominous seven-word message to the world immediately shocked the sports world. For a 4-time NBA All-Star and two-time All-NBA Team member to reveal his own struggles to the world was unheard of. Yet the public response to DeRozan’s courage sparked nothing but love and support.

One fan wrote: “Just like you proved the critics wrong, prove depression that you can overcome it too. You got Compton, Toronto, the Raptors organization, and all of Canada behind you. #ProveEm #DeMarDeRozan”

Around a week after tweeting of his struggle, DeRozan took an even braver step forward as he shared his bout against depression and anxiety in a candid interview with the Toronto Star.

As he discussed his troubles as a young child, one message truly changed the trajectory in which depression and mental health should be viewed, as he stated: ” It’s not nothing I’m against or ashamed of. … I understand how many people go through it.”

These simple yet powerful words that the world should not shame those with mental health problems, invoked a powerful message of courage within many other athletes in the basketball community.

In fact, the current San Antonio Spurs star was able to encourage and embolden NBA player Kevin Love in publishing his own struggles in the Player’s Tribune.

Titled “Everyone is Going Through Something”, Kevin Love recounted the fear he felt when he suffered a panic attack during a game against the Atlanta Hawks.

Immediately at tip-off he states: “I was winded within the first few possessions. That was strange. And my game was just off. I played 15 minutes of the first half and made one basket and two free throws.”

Recognizing that he was not in the right state of mind,  Love ran to the locker room and found himself running from room to room, heart racing, and gasping for enough air to breathe.

What weighed on Love the most after this experience was not the fear of his panic attack itself. In fact, he recounts that the most fear he felt was that he did not want people to find out, or talk about the fact that he was mentally struggling.

In his own words, he states “It was a wake-up call, that moment. I’d thought the hardest part was over after I had the panic attack. It was the opposite. Now I was left wondering why it happened — and why I didn’t want to talk about it.”

It was when DeRozan spoke up about his own tribulations that Love decided that he would no longer be held back by his own fears. In his own interview, he took his mission one step further as he said: “We are all walking around with experiences and struggles –all kinds of things– and we sometimes think we’re the only ones going through them. The reality is that we probably have a lot in common with what our friends and colleagues and neighbors are dealing with. … But creating a better environment for talking about mental health … that’s where we need to get to.”

Current Toronto Raptors star Fred Vanvleet described the impact that DeMar DeRozan had on the basketball world perfectly: “He changed a billion-dollar business,” “He changed it pretty much single-handedly [by] speaking out. And then obviously a lot of guys felt more comfortable, and that’s what it’s about. So for him to do that was huge and we won’t know the impact, we’ll never know the impact, but we just know that it’s a great impact that he had on the league and on guys, on players, coaching staff, whoever — that this is DeMar DeRozan and he goes through [expletive] like everybody else.

Although Vanvleet may be correct that we may never know the full extent of the great impact his teammate has had on the world, we know for sure that mental awareness has been slowly removed from its past stigma.

Kevin Love has championed his own mental awareness foundation known as the Kevin Love Fund, to promote mental well-being. In addition, DeRozan has been active in promoting wellness through participating in several interviews.

Just as mental health awareness is becoming an important part of athletes’ lives, it is important that we realize that more people than we think may have a personal struggle they have a hard time talking about. Just as these two NBA players stepped up when it truly mattered, it should always be in our best interest to do the same for others. DeMar DeRozan: “Nights like this, we gotta turn into a consistent... 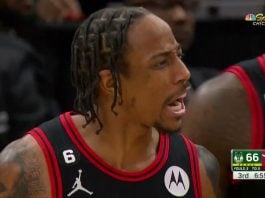 DeMar DeRozan on getting elbowed by Grayson Allen: “It’s his track...