Alex Caruso could be on his way out of the Lakers after the trade of Russell Westbrook on Thursday night.

Caruso is a free agent, but is expected to pursue a lucrative deal during the offseason, which the Lakers may be unable to offer him.

“I’m told by the source that this could be the end of the Alex Caruso era in Los Angeles. Not everyone in that Lakers organization is as enamored with Caruso as some of the other folks that sit in the stands and cheer him on. With Westbrook there now, he obviously could be superfluous,” Bill Reiter of CBS Sports reports.

For his part, Michael Corvo of Clutchpoints says the Lakers could face huge luxury tax penalties if they keep both Caruso and Talen Horton-Tucker.

“The Lakers did want to retain free agent guards Alex Caruso and Talen Horton-Tucker, each of whom could fetch $10 million in 2021-22, though it’s unclear — at this moment — how the Westbrook addition affects their interest and ability to doing so (THT is the Klutch client). Los Angeles can exceed the cap to retain both, though not without complications and stiff luxury tax penalties,” Corvo notes. 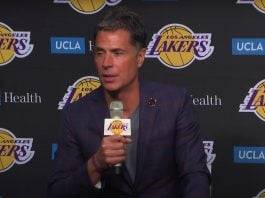