Lonzo Ball spent his lone season in collegiate level at UCLA before entering the NBA as the third overall pick of the 2017 NBA Draft.

As they witnessed the dramatic end of the NCAA Final Four semi-final between Gonzaga and UCLA, Ball and his Pelicans’ teammate Josh Hart reacted to Jalen Suggs incredible shot at the last second of the game.

The Bruins went in to tie (90-90) the game with Johnny Juzang rebounding his own miss and laying the ball back to the basket with three seconds left in the extra time.

Suggs took the ball and ran the floor as he made a shot from just inside the half-court sealing a Bulldogs win and a spot in the championship game. 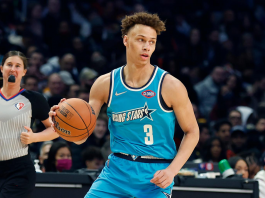