After an intense much at the Peace and Friendship Stadium, Panathinaikos won the Greek derby against Olympiacos, 77-88, despite Nemanja Nedovic’s absence. The guests dominated the rebounds (19 vs 38) having the chance to renew their possession while remained perfect from the free throw line. Olympiacos was struggling on the offensive end and lost a must-win match.

Howard Sant-Roos was the top scorer for the guests with 20 points while Lefteris Bochoridis and Dinos Mitoglou added 15 each. For Olympiacos, Shaquielle McKissic was fighting alone with 20 points with Hassan Martin adding 11.

A double-digit lead they couldn’t keep

With the two teams exchanging the lead, Panathinaikos secured a seven point lead in the first half after playing great defense and scoring in transition with Aaron White (7-14). Panathinaikos managed to extend their lead to 10 points but Olympiacos, scoring from deep range, managed to take the lead down to four with Hassan Martin making it a two-point game (15-17). The two teams went head-to-head until the end of the quarter with Panathinaikos leading by three (18-21).

It just started to get heated

The match started getting more interesting in the second quarter, with the two teams fighting on the defensive end but struggling on offense. Panathinaikos had some great moments with Lefteris Bochoridis, while Olympiacos made some great efforts on defense. The main scoring source for both teams was from the free throw line while Panathinaikos was dominating the rebounds and Olympiacos was committing several turnovers. The guests were playing without stress, knowing that they got nothing to lose despite Nedovic’ absence. Olympiacos had the momentum in the last minute of the second quarter, with a dunk from McKissic and the extra free throw, and headed to the locker rooms trailing by three points (35-38).

They couldn’t keep up with Panathinaikos

Panathinaikos went from +3 to +11 early in the quarter with Olympiacos struggling on the offensive end and committing unnecessary turnovers. Panathinaikos had strong numbers from the perimeter with Sant-Roos while Papagiannis was dominating the area under the basket. Olympiacos was struggling to stay in touch with Panathinaikos but their defense was not bad. Printezis with the floater and the extra free throw took the difference down to 8 points with 3 minutes remaining until the end of the quarter (44-52). Olympiacos with a 10-2 run took the difference down to five points to end the third quarter trailing by 7 points (54-61).

They stayed in control

With ten minutes to return on the game, Olympiacos found a big three frpm McKissic with Larentzakis scoring two more to take Panathinaikos’ lead down to 2 points (59-61). Panathinaikos managed to cover things up pretty quickly taking advantage of Olympiacos turnovers to restore their 7-point lead (59-66). Panathinaikos stayed in control of the game until the end, despite Olympiacos’ comeback, to end the Greek derby with a double-digit lead, 77-88. 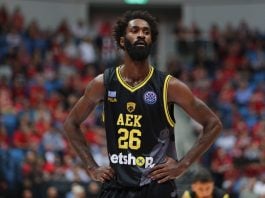