Isiah Thomas shared his thoughts on Derrick Rose becoming the star of the Detroit Pistons.

Thomas believes the appreciation of Pistons fans has helped Rose elevate his game.

“Because coming out of Chicago and then playing for the Chicago Bulls and then being the youngest MVP and having the type of success that he was having, and then the humility and humbleness that he’s always carried himself with…that’s Chicago.

And when he got hurt and he was bouncing around the league, I was so happy that he got to Detroit because now I can not only bond with him, but I knew that we had a fan base that would accept Derrick Rose as a person and appreciate (key word: appreciate) the type of player that they were getting in the latter stages of his basketball career.

Now I think because the Pistons fans appreciate Derrick Rose, I think that it elevated his game a little higher and made him feel a little better about himself and gave him a little bit more belief.

And that’s that Detroit love and community from a basketball standpoint man…when they get behind you and push you – look at me; a little guy.

I won back-to-back championships because of that Detroit love and that Detroit connection. When they get behind you and hey…they elevate you and they lift you and they hold you up and they fight for you,” Thomas, a two-time NBA champion and Hall of Famer, told Brandon “Scoop B” Robinson of Heavy.com. 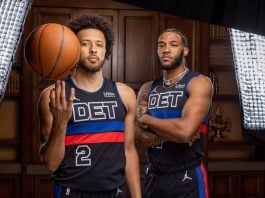