The NBA has confirmed that the 2020 NBA Draft will be held virtually on Nov. 18 due to the coronavirus pandemic.

ESPN’s Bristol, Connecticut studios will be host to the draft, ESPN and the NBA announced today.

Commissioner Adam Silver and Deputy Commissioner Mark Tatum will appear live in studio to announce the first and second round selections, respectively.

While there won’t be a traditional draft “green room” for the top prospects, several of those top draft choices will still make a virtual appearance. 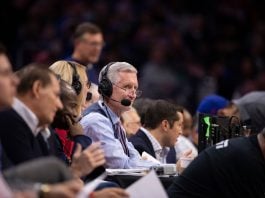 Mike Breen out of Celtics-Heat Game 7 television broadcast team due...