Damian Lillard said he does not expect to receive credit or love anymore in his career moving forward.

The superstar of the Portland Trail Blazers added he does not pay attention to what the critics are saying about him and the Blazers.

I have my own stuff I want to accomplish. I want my coach to keep his job. I want my teammates to be rewarded with good contracts. I want to be a winning player.

I want my teammates to enjoy playing with me and feel like they’re a part of something special. All that stuff matters to me. Making sure I stay true to who I am as a person and being real about everything,” Lillard told Marcus Thompson II of The Athletic.

Lillard led the Blazers to the playoffs and was named the MVP of the seeding games.

Lillard and Portland will square off against the Los Angeles Lakers in the first round of the playoffs, with Game 1 taking place on Tuesday. 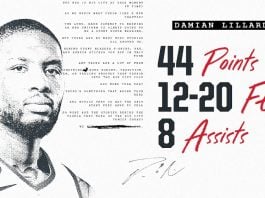 Damian Lillard on Blazers’ loss vs. Nuggets: “I just felt like...