Kevin Love has become the latest player to withdraw from the USA squad for this summer’s FIBA World Cup.

Love, who was one of the first to commit to the national side informed USA Basketball chairman Jerry Colangelo of his decision on Friday night.

“He wants to play but it’s a little bit of a sign of the times when you look at the league in terms of contracts, rumored trades,” Colangelo told The Associated Press. “All of those circumstances puts players [in] a funny position.”

The future of the forward is up in the air at the moment as his current club the Minnesota Timberwolves field various offers to other NBA teams for Love’s services. Cleveland Cavaliers are amongst the front-runners, but the talks have become complicated and are most likely to be lengthened when Cleveland Cavaliers rookie Andrew Wiggins signed his contract this week.

Under NBA rules, Wiggins cannot be traded until 30 days after he signed his contract with the Cavs.

Chicago Bulls are the other side reportedly interested in Love.

A 2012 Olympic gold medallist and a 2010 world championship winner, Love is the latest NBA All Star to pull out. Russell Westbrook, Blake Griffin and LaMarcus Aldridge are amongst the others to pull out of the FIBA World Cup, which begins on August 30.

It has been reported that NBA Finals MVP Kawhi Leonard is also pulling out.

The decision to not participate in this summer’s World Cup must have been hard for Love, who has deemed playing for Team USA to be one of the highest honours possible.

Colangelo though said that even without Love, the Americans can cope without him.

“I think he truly is remorseful,” Colangelo said. “It’s not like there’s a barrel full of power forwards that can rebound and shoot the ball like Kevin Love.” 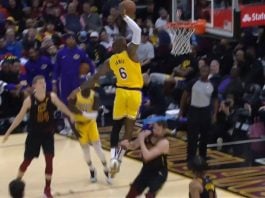 Draymond Green to Kevin Love: “I think Bron owe you some...