If that two week timeline holds up, that would mean Gordon could be in danger of potentially missing all of the Rockets’ “seeding games”, as their last one is on August 14.

The team’s focus will be getting him healthy for the playoffs.

Gordon landed awkwardly on the foot of Vincent Poirier of the Boston Celtics in the Rockets’ final scrimmage on July 28 and had to be helped off the court by his teammates.

Not too long after the game, X-Rays came back negative on Gordon’s ankle.

Players like Austin Rivers, Danuel House and Ben McLemore will need to step up more to help James Harden and Russell Westbrook. 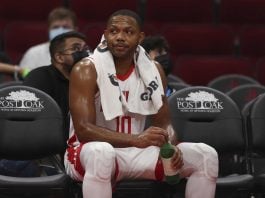