Barcelona announced Pierre Oriola’s contract extension for four more years. The player will continue playing for the Spanish powerhouse until 2024 under the guidance of Saras Jasikevicius.

Oriola joined Barcelona in 2017 coming as a champion from Valencia. The experienced forward/center has played 199 games with Barcelona, winning two Copas del Rey and reaching the Liga Endesa finals twice. 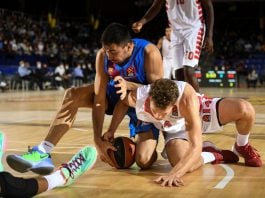