Jaylen Brown of the Boston Celtics and Mike Scott of the Philadelphia 76ers aren’t too thrilled with the NBA’s choice of social justice messages for jerseys.

Both players shared the same sentiment that the NBA decided to make a list of approved messages, rather than let players choose phrases that express what they feel.

“I would like to see — because I think it can still happen — more options available to put on the back of our jerseys,” Brown told reporters in a video conference. “We understand anything vulgar our league doesn’t necessarily represent, but for histories and causes such as now, I think that that list is an example of a form of limitation. I think we should be able to express our struggle just a little bit more … I was very disappointed in the list that was agreed to. I think things were tried and attempts were made to add to that list, but the NBA agreed that that list was satisfactory. Hopefully we can get some more names on that list.”

“Maybe ‘Break the Cycle,’ ‘Results’ — that’s what everybody is really playing for — ‘Inequality by Design,'” Brown said. “Things like that I think may have a deeper impact than some of the things that were given to us. I think it was a little bit limiting.”

“They gave us some names and phrases to put on the back of jerseys. That was terrible. It was just a bad miss, a bad choice,” Scott said via ESPN’s Tim Bontemps. “They didn’t give players a chance to voice our opinions on it; they just gave us a list to pick from. So that was bad, that was terrible. I’m all about just doing, instead of saying and posting, or putting something on the back of your jersey. I don’t think that’s going to stop anything, you know?”

The NBA released an approved list of 29 social justice messages that players can choose to put on the back of their jerseys for the season restart in Orlando.

NBA players are scheduled to begin leaving for Disney World on July 7 and will continue arriving through July 9. Jaylen Brown: “We are not scared” 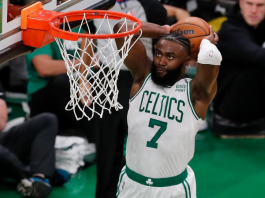 Jaylen Brown: “My faith is higher than it’s ever been before” 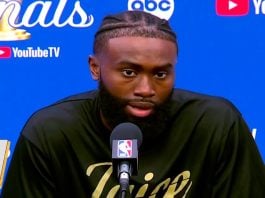 Jaylen Brown on him and Jayson Tatum playing defense Jaylen Brown: “We’ve got to continue to do the little things...

Jaylen Brown: “I think homecourt is definitely an advantage”