After the opening day of the Copa del Rey went by with two fairly convincing victories for Real Madrid and CAI Zaragoza it kicked into action with the first game of the second day. An underachieving Laboral Kutxa squad had their hearts broken by Rafa Martinez as the guard hit a last second free throw to send Valencia through 74-73, after Fernando San Emeterio committed an agonising foul.

Laboral Kutxa started brightly as they looked to find Tibor Pleiss early on with German starting the game with a size advantage on JJ Triguero inside, and he made a hook shot to open the scoring. With Pleiss occupying the inside Baskonia started to find space around the perimeter for Andres Nocioni, Fernando San Emeterio and David Jelinek to all hit threes in the first. On the other end Baskonia started aggressively on defence, trying to stop Valencia from scoring inside, which was largely succesful early on as they slowed up their hand off pick-and-roll game by bumping cutters and fighting through off ball. It did however leave space for Valencia to score outside, with Doellman, Van Rossum, Martinez and Dubljevic all knocking down shots from beyond the long line in the first quarter. It was Pleiss who was dominant in the quarter though, scoring eight points along with two blocks, and drawing JJ Triguero into two early fouls in the first two-and-a-half-minutes, forcing him to the bench.

Towards the end of the first Baskonia started to pull away after Lubos Barton fouled Nocioni on a made three pointer, after some free throws to close the first from Walter Hodge the Basque team led 26-17. The ball movement and fluency of Baskonia’s offence in the first was superb, with credit going to the entire team, but especially Tibor Pleiss, who not only occupied space inside while showing a deft touch around the rim, but also set a number of hefty screens to free up Baskonia’s wing players.

With Lamont Hamilton and Nocioni matching up against Serhiy Lishcuk and Dubljevic respectively to start the second quarter it became quickly evident that Baskonia had a quickness and athleticism advantage over Valencia . When Adam Hanga came in after a time out with 6.42 remaining in the quarter the advantage only got bigger, despite Valencia switching up their front court. With Hamilton flashing a quick high low pass to a cutting Hanga for a dunk immediately after the time out a Baskonia run started that continued with Pleiss coming in for Hamilton.

With Nocioni knocking down a three after curling round yet another superb Pleiss screen being quickly followed by a two-handed Pleiss jam in secondary transition the Baskonia lead grew to nine. After a pair of Pleiss free throws, the German had to head to the bench after an unnecessary foul on Lishchuk as he cut across the key. With Hamilton coming in for Pleiss they kept their lead steady until the end of the half, with Fabian Causeur and Adam Hanga turning in solid performances with Baskonia heading in as 45-35 leaders at the half.

With a ten-point deficit after the half Valencia needed to find a way to get themselves back into the game, and found a great defensive performance from Lishcuk on his return from injury. He spent the majority of his time bodying up on Pleiss and making his life difficult trying to post up, or perfectly judging his pick and roll hedges, as Baskonia’s previously superb ball movement ground to a halt, with Lishchuk playing a large part. On offence the slack for Valencia was picked up by Oliver Lafayette with the American guard hitting a number of pull up jump shots from pick-and-roll plays, and finding his team-mates with equal aplomb as they benefited from the defences reaction to his shooting touch. With Valencia’s run came Pleiss’s third foul, as Lishchuk drew him into fouling in the post.

Sergio Scariolo took a timeout after the stretch with their ten point half point lead cut to three at 51-48 with 4.12 and regained some of their deficit afterwards with David Jelinek getting an NBA style continuation on three-point play and a little later Nocioni got a very fortuitous roll on a three pointer that prompted a Valencia timeout, with two minutes left and the lead back up to nine. The quarter close with Lafayette knocking down two free throws after a Pepe Poeta foul and Causeur and Martinez trading pull up three pointer to push the score to 62-55 in Baskonia’s favour.

Hamilton had a terrible start to the fourth quarter as Valencia quickly pulled level first Hamilton blew a dunk, before failing to hedge out on a Van Rossum-Lishchuk hand off that resulted in the Belgian sinking a pull up three pointer. On the ensuing possession Hamilton missed as mid ranger before committing a heinous unsportsmanlike foul on Lishcuk as he rolled to the rim on a pick and roll play. This resulted in Lishchuk tumbling to the ground in obvious distress, injuring himself and missing the rest of the quarter and likely ruling him out of the rest of the tournament.

Justin Doellman stepped in to knock down both of the free throws with Lishchuk heading to the bench. After Martinez knocked down a contested shot to tie the game at 62, Adam Hanga knocked down a corner three before Tibor Pleiss picked up his fourth foul hedging out on Martinez, before picking up his fifth foul with a little over five and half minutes for a push on Dubljevic while rebounding, and the Montenegrin knocked down both free throws. The next two minutes proceeded with very little in the way of scoring, until Hodge hit a floater and a layup on consecutive possessions to give Baskonia a four point lead with three minutes left prompting a timeout. On the next possession Martinez hit a key corner three before grabbing a defensive rebound and drawing a foul from Hanga to go to the line, splitting the pair to tie the game at 69-69, allowing Doellman to put them ahead on their next offence, putting back his own shot.

With Valencia leading by two with just a minute and a half left Baskonia went to Nocioni, who made a really tough layup having beat Doellman one on one. Dubljevic missed a hook on Valencia’s next possession and then got burnt by Hamilton on a drive for the American big to score a layup to push Baskonia 73-71 ahead with 40 seconds left. Then came the drama, Lafayette took the decision for Valencia to take a two for one shot so they could get the ball back, and made a tough fadeaway jumpshot to tie the game. Next play down the court Hodge went round an Nocioni screen to find El Chapu on the right wing isolated against Doellman, he drove left and pulled up from the short corner. His shot agonisingly hit the side of the backboard as he misjudged the attmept. The rebound fell into the hands of Doellman, who pushed the ball with five seconds left, slipped a pass horizontally at half court to Lafayette, who moved it on again to Martinez on the right wing. As he drove and shaped to shoot he was marginally caught a recovering San Emeterio and the referee’s whistle blew with just 0.4 seconds left.

Martinez stepped up to finish an exciting game anti climatically, knocking down the first before deliberately missing the second to allow time to expire and break the hearts of the Baskonistas.

Valencia’s win would be a tough act to follow but unfortunately, many people expected what would happen next as the second game went largely as planned. Barcelona routed Iberostar Tenerife 102-60, who fully felt the hole left by Blagota Sekulic’s departure to Fenerbahce. With the nature of their victory Barca found time to run their bench with every player playing over 7 minutes and none more than 20.

Tenerife took the lead on their opening possession with Saul Blanco knocking down a pull up two pointer on the right baseline, which proved to be the their only lead of the game as Kostas Papanikolaou knocked down his own jumpshot off the dribble, before Erazem Lorbek scored off an Ante Tomic offensive rebound. Barca quickly pushed out to a 18-9 lead on a Kostas Papanikolaou three-point play which prompted ‘Puta Barca’ (ed: Yeah, we all know what that means) chants from not only the Canarias fans, but also what seemed like the fans of the other six teams. This seemed to give Tenerife a little hope as portly big man Jesus Chagoyen went to the free throw line twice to close the quarter and put them back within six points at 22-16.

Barca kicked on at the start of the second quarter with Boki Nachabar knocking down a triple, and putting back a Victor Sada airball. As Tenerife’s heads dropped Barcelona started to pick up offensive rebounds, firstly with Joey Dorsey finishing a Brad Oleson lob through heavy contact after Nachbar grabbed an offensive board, and then on their next offence Sada rebounded a Nachbar three before missing a layup, and the missing the consequent putback before Alejandro Abrines skied for the ball and kicked it out to an open Brad Oleson who sank a three, prompting a Tenerife timeout, with them trailing 34-21 after just 2 minutes and 47 seconds. Barca pushed on further through the second half as it quickly became obvious that Canarias would be no match for them, and ultimately led 54-34 at the half, after a run that included a huge Joey Dorsey tomahawk dunk, after a pick and roll with Abrines.

The third quarter began with Barca continuing their dominance, as Juan Carlos Navarro rubbed off an Ante Tomic screen to knock down a step to the side three and La Bomba knocked down another three, this time a pull up, from another Tomic screen as we passed the midway point in the quarter. After Kostas Papanikolaou hit a corner three and Joey Dorsey dunked home a Sada lob Tenerife had to call a time out as they trailed by 71-45 with 2.31 left in the quarter, though it did little to change the arrears at the end of the quarter with Canarias in a 75-48 hole at the half.

Perhaps the biggest cheer of the second half came when a cheerleader performed some acrobatics during the third quarter break. With disappointed Baskonia fans exiting the building early to drown their sorrows and Canarias fans quietened by an imperious Barca lead.

It became quickly obvious at the start of the fourth quarter that Barca’s objective was to see how many dunks they could get for Dorsey, as Abrines lobbed to him to finish on the quarter’s opening possession. Dorsey couldn’t convert on his next attempted dunk though, When mid-way through the third he stole the ball it seemed he would try to bring the rim down, only for Jaime Heras to foul him in transition, drawing boos from the crowd. With Dorsey heading to the bench the game finished without any fireworks as Barca topped 100 points on Abrines’ three, to win the game 102-60.

It is hard to take anything in particular from this game for either team, Iberostar Tenerife showed that without Sekulic they will likely be a bottom dweller in the Liga Endesa, with Lazaros Papadopoulos unlikely to replace Sekulic’s production.

For Barca it seemed this game was like a scrimmage at times, they knew they were comfortably better than Canarias and coasted the entire game. Their real test comes tonight against Valencia, a team they lost to just a few days ago. 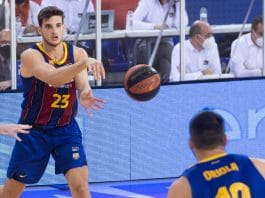