Former number one draft pick Andrew Wiggins has not reached his full potential yet, says Kevin Garnett. The Hall of Famer believes that the Golden State Warriors forward could still be an MVP caliber player.

“He has the ability to be an MVP. He just never wants to push through. I don’t even know… me and Sam [Mithcell] root for Wiggs every year… great guy, great kid… if he called me I’m picking it up and Imma go as hard as I can for him, that’s my guy. But I wish that he would kick it in third gear and really show people the difference and his ability and not just waver like that.”

Wiggins was traded to Golden State for D’Angelo Russell just before the trade deadline.

This season the 25-year-old forward is averaging 21.8 points, 5.1 rebounds and 3.7 assists per game. Since joining the Warriors he’s averaging 19.4 points per game. 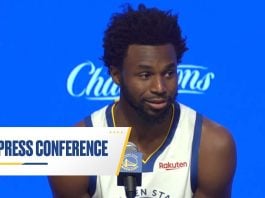