February 14th, 1993. Iverson, along with several of his friends, were posted up at a bowling alley on a night out in Hampton. Iverson and his group were approached by another group – who claimed Iverson and CO were being awfully too loud. The group who approached Iverson was predominately white, while Iverson and his friends were all black, leading some to believe this was a racial incident with both parties feeling entitled over the other.

A brawl ensued. Police rushed to the scene in the bowling alley and consequently arrested Iverson and three of his friends. No arrests were made of the opposing group, sparking backlash in the papers once the news of Iverson’s arrest was made public. The 17-year-old Iverson was arrested and convicted to 15 years in prison.

Due to insufficient evidence, Iverson was released after spending 4 months at a Newport Prison facility before being granted clemency by then Virginia Governor Douglas Wilder. Should Iverson not been granted clemency we may not have seen him at the collegiate or NBA level at all, no posters would be in our rooms and his legacy in Philly would be non-existent. 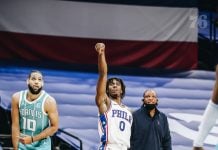