Lokomotiv Kuban have been busy this off-season with a familiar face returning and a new signing coming in as the Russian side prepare for their maiden Euroleague voyage.

Kuban have re-signed popular forward Derrick Brown, who has inked a new deal that will keep him at Lokomotiv until the 2014-15 season.

Brown was a key member of the side that won last season’s Eurocup, giving them a platform to this season’s Euroleague. The American was also chosen to the All-Eurocup second team, averaging 15.7 points, 4.3 rebounds and 1.7 steals a game.

The Russian side originally signed Brown, a product of Xavier University from the Charlotte Bobcats. He has suited up for the New York Knicks as well.

“Derrick Brown is a big part of this team, one of our best and most dangerous players,” head coach Evgeny Pashutin said. “He combines [aggression], efficiency and quickness. I am glad that he will stay with us – we will now work together to get more wins.”

Pashutin was also boosted by the news that Croatian scorer Krunoslav Simon signed a two-year deal with the club, as he joins from Unicaja Malaga.

“He is a very talented player, very aggressive on offense, with good shooting range and good one-on-one skills,” Pashutin commented.

“I am sure he will improve our perimeter skills with his deep range. He can play in several positions and know how to do almost everything on the floor. He will make us stronger.” 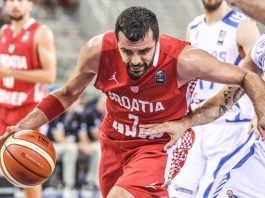 Jordan Loyd gets the Euroleague Round 2 MVP