The Eurocup Final returns to Charleroi with a promising game tonight and TalkBasket’s Cagri Turhan is in Belgium, covering it live. Read his previews, just hours before tonight’s final.

Lokomotiv Kuban was one of the contenders all season. It represents a rise of a new power in Russian basketball with a roster formed to achieve Euroleague ticket with several elite Euroleague players.

Such a major investment, of course, brings an extra pressure as if the game, itself already doesn’t have enough. During the practice session open to media last night, players seemed to feel the pressure more than their opponents, not exposing a very good body language.

Even the coach of Krasnodar side Evgeny Pashutin, who has enormous experience at this level both as a player and coach, looked in a similar way sometimes.

After their terrific run last season at Euroleague, almost pushing heavy favorite CSKA Moscow to a game five in the playoffs, Bilbao Basket was also considered to be one of the contenders before the season. But, they followed a different pattern with lots of up and downs this season. Feeling the pressure does not look like the main concern for Bilbao Basket unlike Lokomotiv Kuban.

More than 2,000 fans are traveling from Bilbao to Charleroi. Spiroudome could be expected to paint with the colors of men in black. They have also a lot of pressure on their shoulders with fulfilling the expectations of their loyal fans. However, they looked like in the right psychological mood, not feeling an extra pressure and just enjoying the moment.

They seem to feel happy to be here and not worrying about losing the title in the first place. Most of the news items in the last couple of weeks were about the financial troubles of the club and unpaid salaries for months. Even that didn’t spoil their run in the tournament. Handling all these issues successfully starts with Eurocup Coach of the Year, Fotis Katsikaris.

His teams were overachieving teams from his very first experience with AEK to Bilbao Basket. But, it is different to be expected to deliver instead of being an underdog. In 2010, he had carried his side to Eurocup Final Four in Vitoria just few months after taking over the team which was in the relegation zone at ACB. In their rivals arena packed with Bilbao Basket fans, men in black didn’t live up to expectations. That disappointing loss to Alba Berlin in front of their own fans followed by ACB Finals and an amazing run at Euroleague.

Few months ago, Bilbao Basket failed to deliver in Vitoria again, at Copa del Rey in a very similar way. If that disappointment is going to be followed by another achievement again, tonight is the time. The atmosphere seems similar to Saporta Cup Final in 2000. Dusan Ivkovic’s AEK had beaten a Kinder Bologna roster packed with talent back then. Not to forget, Fotis Katsikaris was on bench that day.

Looking at the technical side of the final, Lokomotiv Kuban is the more advantageous side with a lot of talent in its roster. Especially their big man rotation Aleks Maric, Richard Hendrix, all Eurocup second team player Derrick Brown and experienced Aleksey Savrasenko is intriguing. In order to handle them, All Eurocup first team player Lamont Hamilton needs a major support if they don’t want to lose the rebounding tonight.

On the other hand, controlling the tempo is always crucial at this games and Bilbao seems to have more options at the backcourt rotation starting with experienced Nikos Zisis and Raul Lopez duo.  When we consider the fact that when Eurocup MVP Nick Calathes is allowed to run the show with its partner Mantas Kalnietis, Lokomotiv Kuban can demolish even very strong sides such as Galatasaray or Valencia.

However, when the opposite happens and they can’t find fast break opportunities, they had problems. Controlling Calathes is probably the most important thing tonight for the Basque side. Besides, clash of sharp shooters is another interesting matchup with Kostas Vasileadis against Jimmy Baron and Simas Jasaitis.

Moreover, Pashutin, one of the best performing coaches in the last years, knows how to deal with one game strategy. He can find the mismatches in the game and quickly alter the strategies to take advantage of the opponent weaknesses. But he will face a coach from Dusan Ivkovic school, knows how to react this moves. Overall, it sounds like a quite promising matchup with Euroleague ticket on the line.

From Charleroi, Cagri Turhan for TalkBasket.net 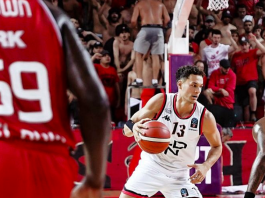