Just a week before the end of the Regular Season, and getting ready for the Top 16, Besiktas JK announced on Friday the addition of guard Dan Ewing for the rest of the season.

Ewing played college ball in Duke until 2005 and after a couple of seasons with the Los Angeles Clippers of the NBA he came to Europe to join BC Khimki Moscow Region, making his debut in the ULEB Cup.

After that, he joined Asseco Prokom of Poland, where he spent three seasons playing also in the Euroleague from 2009 to 2011. With Asseco Prokom he won three Polish League titles also being named MVP of the Polish Finals of 2011. He then moved to Azovmash for the 2011-12 season, where he led the team to the Ukranian League finals. 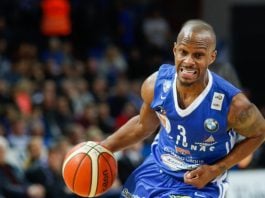 Jordan Theodore agrees to a deal with Besiktas