The FIBA World Ranking has been updated after an exciting first window of the FIBA Continental Cup 2021 Qualifiers, with the United States of America maintaining their number one status.

Ranking leaders USA (781.6) and the seventh-ranked Greece (647.4) were the only national teams from the previous top 10 to win both of their February games, holding on to their respective positions.

However, there was some movement at the top end of ranking, with Serbia (661.3) leapfrogging France (656.5) into fifth place. Both teams got their FIBA EuroBasket 2021 Qualifiers campaigns underway by splitting their games – Serbia beat Finland but lost to Georgia, while France got the better of Montenegro, but had to acknowledge defeat to Germany.

Czech Republic (591.5) and Brazil (589.4) both gained a spot each in the World Ranking, with the move being of extra significance for Brazil, who capitalized on their strong start of their FIBA AmeriCup 2021 Qualifiers campaign to move up to the top 10, following a pair of victories over Uruguay.

The rise of the Czechs and the Brazilians came at the expense of Russia (585.3), who lost two spots and dropped to 11th place in the standings.

As the ranking considers the results from the past eight years, the changes are also in part to do with the gradually shifting weighting of previous years.

The most recent ranking update is the final one ahead of the Tokyo Olympics and will be used to determine the seeding for the Tokyo 2020 Men’s Olympic Basketball Tournament Draw (March 20, 2020). 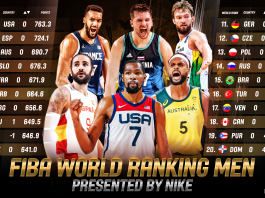