Miami Heat guard Dwayne Wade will miss this summer’s Olympic Games in London due to a knee injury.

Wade, who recently won his second NBA title with the Heat will require surgery on his left knee and has withdrawn from consideration. He had stated that if he was chosen to play in London it would be his last international tournament as he wanted to allow other young stars the chance to represent the United States.

The 2006 NBA Finals MVP has also critcised the fact that Olympians should be paid to play at the Olympics.

Wade has already competed twice at the Olympics, once in 2004 and he was the leading scorer of the gold-medal winning “Redeem Team” in 2008 where the Marquette standout averaged 16 points.

“As many people know, throughout the season, I struggled with a recurring knee issue,” Wade said in a statement. “After the championship game, I visited with my doctors for a round of comprehensive medical tests, and the recent results dictate the need for surgery.

“While every part of me wants to be in London, I need to take this time to do what’s best to improve my health and allow me to play the game I love.”

Wade was expected to be announced in the final squad for the Olympics along with fellow Miami Heat team-mate LeBron James. He now joins Dwight Howard, Andrew Bynum and Derrick Rose on the USA’s injured list with the Games less than a month away. 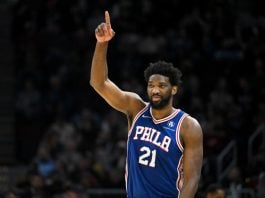 Mario Chalmers reminisces over the time he took over in the...

Dwyane Wade shared the recipe to his all-time favorite snack

Stephen A. Smith reacts to Carmelo Anthony saying he could have...