Deng, who currently is on holiday injured his wrist in January and requires surgery, something the Bulls want the All-Star forward to get sorted now which would mean missing the Olympic Games in London.

The South Sudan-born Deng has repeatedly stated that he will delay the surgery and play for Great Britain in London which would mean he would miss what was rumoured to be the first 15-20 games of Chicago’s NBA season.

The NBA though has now placed Deng on the high risk of players meaning that the insurance costs of covering Deng are around £300,000 which has angered Spice.

Despite the high cost, British Basketball has said that it will pay the bill.

“The insurance to cover Luol is always expensive due to his high value, and due to the back exclusion placed on him by the NBA’s insurers some years ago,” Spice said.

“Our medical expert expert opinion remains that his back is no worse than others in the NBA but we had to continue to cover this as we are contracted to do. Unfortunately, we have had no support from the NBA regarding this issue which remains a constant disappointment.”

Great Britain begin their training camp in Houston on June 14th and hope to have Deng available provided that he is cleared and insured to play. GB’s first pre-Olympic warm-up will be against Nigeria.

The Brits will also play Russia, Spain, France and USA before London 2012. 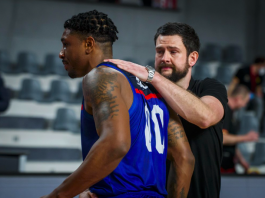