The injury recovery time for Klay Thompson is getting shorter and shorter and the Golden State Warriors fans can only be happy. Thompson had suffered a cruciate ligament rupture of the knee during game 6 of the 2019 NBA Finals against the Toronto Raptors then lost 4 to 2 by his Warriors.

In recent months, the top management of the franchise had announced on several occasions that the player would be re-evaluated after the All-Star game break. That date is approaching and indeed Thompson is making significant progress as he himself has claimed.

Thompson’s words on his return

“It’s going fine. I mean, it’s fun to see these guys play. Obviously, I would like to be there with them. It is a long process. I’ve always worked since the third day after race 6 of the Finals. You may not have seen me much, but I’m working. I don’t know if I’ll be back during this season, I’d love to. I like the support of the fans that we have every night at the Chase Center, which shows what fan base we have. They also know that it is a difficult season, but they also know that the future is bright. I am trying to be sure that this type of injury will never happen to me again, so I am going very carefully. I want to play at very high levels until the late 30s.” 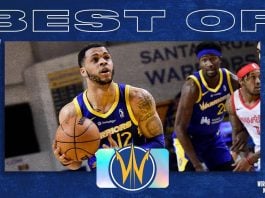