Former Toronto Raptor and NBA champion Jeremy Lin finally got his championship ring delivered to him in China.

Lin posted pictures on Instagram to show off the giant ring that features 640 diamonds.

The rings were given out at the championship banner ceremony in October, but with Lin playing for the Beijing Ducks in China, he was unable to attend.

Lin is averaging 24.9 points, 6.0 rebounds and 5.7 assists per game in the Chinese Basketball Association (CBA). 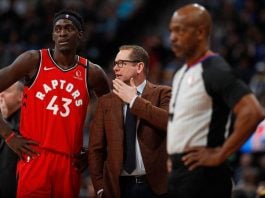