Allen Iverson excelled as a Bethel High School basketball player in Hampton, Virginia, before moving on to great feats with the Georgetown University Hoyas and Philadelphia 76ers.

On Tuesday, Bethel High honored Iverson by naming its gym the Allen Iverson Gymnasium. The school gym also has a new court named in his honor.

The Basketball Hall of Famer attended a ribbon-cutting ceremony outside the gym on Tuesday. There were hundreds of attendees at the event.

“It’s about my family and my hometown, in that order,” Iverson was quoted as saying by the Daily Press, a Virginia newspaper. “Knowing these people love me and respect me and root and cheer and believe in me, that’s everything.

“This place is who I am. It’s what I represent.”

One of the dignitaries, who spoke before the honored guest, summed up AI’s legacy this way, according to the Daily Press: “Allen Iverson will be remembered for the way he competed with immeasurable heart and determination.”

“His exceptional talent has taken him all over the world, but he always remembered his hometown and where it all began here at Bethel,” Saunders was quoted as saying. “He’s been giving back quietly and without fanfare, and today we thank him for all he’s done and all he continues to do.”

Iverson spent his first three high school years at Bethel High. Then, he was involved in a highly publicized brawl at a bowling alley and spent time time behind bars as a teenager. “He was convicted of maiming by mob and sentenced to five years in prison,” the Daily Press reported, “but Gov. L. Douglas Wilder granted him clemency after three months at City Farm, citing insufficient evidence to convict.” He went to Richard Milburn High School as a senior and graduated from RMHS before heading off to Georgetown to play for John Thompson. 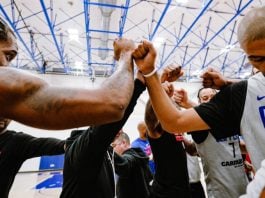