Caja Laboral signed playmaker Thomas Heurtel to a four-year deal, fortifying the team’s backcourt for years to come. Heurtel (189, 22) spent last season playing in Spain on loan for Meridiano Alicante where he averaged 9.5 points and 2.4 assists per game.

He grew up with Pau-Orthez and averaged 10 points and 6.2 assists per game during the 2008-09 French League season, his first as a full-time player, after which he was awarded the Meilleur Espoir PRO A 2009 trophy as the best prospect in the French League.

Heurtel signed a four-year deal with Asvel Basket following that season, but never suited up for the club, instead spending one season on loan at Strasbourg in France and another at Alicante before Laboral bought out his deal to bring him to Vitoria.

Heurtel has also played for the French national team at the junior level and won a silver medal at the 2009 Under-20 European Championships in Rhodes, Greece. 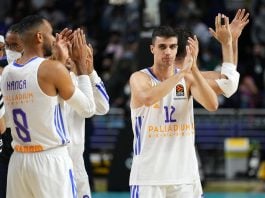