When the news broke at the World Championships that Eurobasket 2011 would be extended from 16 teams to 24, it didn’t go down too well with the majority of nations.

It was a different story in Georgia.

When the news broke to the Georgian players, they were attending the wedding of fellow countryman Zaza Pachulia, of the Atlanta Hawks. Pachulia needed convincing at first, as he thought it was a hoax phone call.

When the Atlanta big man knew that it was official, he and his new wife flew to Istanbul personally to thank Nar Zanolin, FIBA Europe Secretary General.

Being in this tournament means a lot to the people of Georgia. Parties began in the streets, horns were being tooted, people were generally excited that their basketball nation was given an automatic birth to Eurobasket.

FIBA Europe must of felt like true humanitarians upon hearing the reaction.

Despite this being their maiden basketball tournament, the Georgians have a squad that shouldn’t be taken lightly.

In Group D, alongside Slovenia, Russia, Belgium, Ukraine and Bulgaria. The country, located to the west by the black sea, could have a genuine shot of qualification to the second round. Slovenia and Russia are heavily favoured to advance, which would leave the door open for third place.

Pachulia and the Hawks bowed out of the NBA Playoffs to the Chicago Bulls, but this summer, he leads Georgia out in Klaipeda on the 31st against Belgium. He led the Georgians in Eurobasket qualifying with 15 points-per-game.

Nikoloz Tskitishvili an ex-New York Knick, who’s been involved in the Georgian set-up for over 12 years will also be in Lithuania, along with the team’s leading rebounder Viktor Sanikidze, who himself was an NBA draft pick in 2004.

The Georgians have various players who earn their trade in Spain’s ACB and Italy’s Lega league – so expect them to compete – whether they have the ability to close out a game against Slovenia and Russia is another thing. But if they get results against Bulgaria, Ukraine and Belgium, the games that Georgia have the best chance of winning, then a trip to Vilnius awaits.

Then again, anything could happen. A Slovenian or Russian breakdown, perhaps? Just imagine the celebrations in the capital Tbilisi if that does happen?

One thing for sure is, whether they qualify from the preliminaries or not, Georgia have arrived on the big stage, and they intend to stay here. 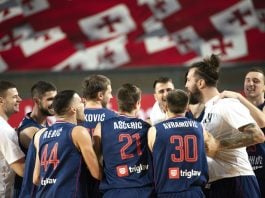 Serbia book its ticket for the EuroBasket 2022