Recently crowned VTB United League champion with Khimki, Rimas Kurtinaitis, shared his thoughts with the media about his success as a coach as well as some potential moves in the players’ market.

Lithuanian coach has been labelled as Khimki’s Jose Mourinho byt the club’s fans after he won the first trophy for his new club in just a couple of months in charge.

“I haven’t heard such remarks in Russia myself. There were similar talks when we won all titles with Lietuvos Rytas in 2008-2009”, said Kurtinaitis.

In addition to winning titles there is one more similarity between Kurtinaitis and the world-famous Portuguese football coach. They both like to say things to media that later bring lots of attention.

One of the most recent examples was Kurtinaitis’ conclusion about VTB Unite4d League’s final. Khimki defeated CSKA Moscow coached by Jonas Kazlauskas (another Lithuanian coach and a friend of Kurtinaitis) in the final.

“Basketball is not sex – both parties can’t be pleased”, Kurtinaitis concluded.

Former basketball star, Rimas Kuritnaitis, also shared his thoughts about how it felt to coach against Jonas Kazlauskas:

“There aren’t many coaches in basketball against whom you can play chess on the court.

“Even in Euroleague many coaches are not reacting to your moves at all. They [coaches] worth there only because of they have better agents that are better at self-promotion. Let’s say there are enough such coaches from Balkans.”

Speaking of the future Kurtinaitis stated that Khimki’s goal for next season is to qualify for Euroleague. Either by winning Russian league and getting direct spot in group stage or by reaching the final and repeating this season’s path by making it through the qualifying rounds.

There should be no problem for Kurtinaitis to get the players he wants for his team. Well, at least money won’t be a problem:

“Khimki is a club that can fight for the best players on the market.

“We can over-bid financially such teams as Olympiacos, Maccabi, Barcelona or Real Madrid.

“If a player is needed for us the sponsors will surely find the money necessary to sign him.

“One of such players is Paulius Jankunas. He already played here and people at the club know him.” 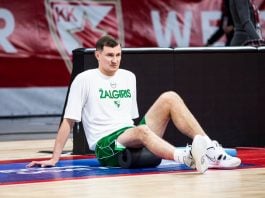