With a great mix of size, talent and know-how, one of the world’s top prospects became the real deal this season by leading his team into the Eurocup Finals. For his key role in that achievement and for his impact on Eurocup courts all around the continent, versatile center Donatas Motiejunas of Benetton Basket Bwin has been chosen by Euroleague Basketball as the Eurocup Rising Star Trophy winner for 2010-11.

In its third season, the Rising Star Trophy recognizes the best Eurocup player who was younger than 22 on July 1 of the summer before the season started. Motiejunas, who turned 20 years old a few days before Benetton started the Eurocup Qualifying Round in September, has been productive beyond his years since then, at both ends of the court. He led Benetton in fouls drawn this season, ranking fourth overall in the Eurocup, while collecting the second-most points, rebounds and blocks on the team. With Motiejunas as one of just two players to start all 14 of its Eurocup games this season, Benetton lost just once. Simply put, no other under-22 player in the Eurocup boasted such numbers, readiness and ability to take his team so deep into the competition as Motiejunas. Indeed, Motiejunas and Benetton can now try to take the last step to glory together at the Eurocup Finals in their own city!

The Rising Star Trophy is part of an expanded awards structure launched in the 2008-09 season meant to enhance recognition of the finest Eurocup players for their efforts on the basketball court throughout the season. Apart from the Eurocup Rising Star, Euroleague Basketball and its in-house experts will also select the Eurocup Coach of the Year, All-Eurocup first and second teams, and the Eurocup MVP. Additionally, the Eurocup Finals MVP award will go the best player at that event as voted by accredited journalists in attendance during the title game.

After helping Benetton qualify for the Eurocup in the preseason, Motiejunas started strong, with 11 points and 7 rebounds in the team’s first regular season game against Chorale Roanne. Motiejunas added a team-high 13 points and 7 rebounds to lead his team to a tough road win against PAOK Thessaloniki. When Asefa Estudiantes came to Treviso, Motiejunas shined with a season-best 19 points to give Benetton a 79-72 home win. He had 17 points in Roanne and 16 more against PAOK to make Benetton one of just two teams to finish the regular season undefeated. Motiejunas averaged 14.2 points and 5.8 rebounds in that phase, showing he was more than ready for his second Eurocup season. Despite a slow start in the Last 16, Motiejunas bounced back in consecutive victories against Panellinios and had an outstanding game – 13 points, 9 rebounds, 8 fouls drawn – against Alba Berlin, in a road triumph that lifted Benetton into the Eurocup Quarterfinals. In a direct battle for first place in their Last 16 group, Motiejunas posted 12 points and 6 rebounds in a pivotal win over Cajasol. Despite then battling foul problems in his team’s Quarterfinals victory over Goettingen, Motiejunas finished the season averaging 11.4 points, 5.5 rebounds, a steal and 4.5 fouls drawn in the Eurocup season.

Motiejunas joins Victor Claver of Power Electronics Valencia and Milan Macvan of Hemofarm Vrsac to become the third player to receive the Rising Star Trophy. Now, Motiejunas will be aiming for a second and more important trophy, that of the Eurocup champion, as he tries to help Benetton Basket Bwin reach the winners’ podium at the Eurocup Finals in Treviso, Italy on April 16 and 17. 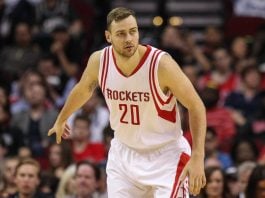 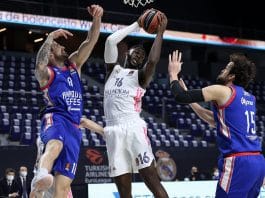