“I think it’s also a disrespectful notion to even bring something like that up, that, ‘Hey you guys didn’t even have this guy and that guy.’ That’s disrespectful to France or whoever else is in the tournament. France beat us. Doesn’t matter who was on the team.

I couldn’t be more proud of these 12 guys who sacrificed their summer to come here having never played together before. And they put themselves in the arena and competed and they deserve credit for that, just like France deserves credit for winning. It’s not about, ‘Well the United States didn’t have their other guys.’ There’s no such things as other guys. These are the guys that were here, and they did a great job and I’m very proud of them,” Popovich said. 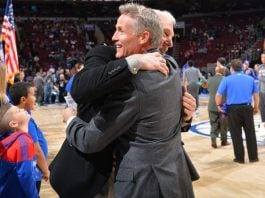 Gregg Popovich on European and NBA basketball: “Now we are getting...