“It’s always going to be a Knicks town. That’s all we grew up on. What the Nets are doing is great, don’t get me wrong. That’s amazing. But I grew up a Knicks fan. I grew up watching John Starks. Times have changed. But New York is always – you see behind you, they have Knicks hats on,” Gibson said. 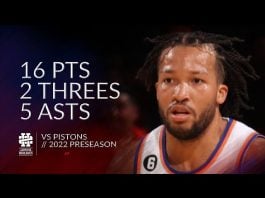