Giannis Antetokounmpo talked about the roster of Greece in the Basketball World Cup as well as a potential match against Team USA.

Here is what the “Greak Freak” told reporters in the press conference after the victory over Montenegro:

On the Greek squad: “I think we have a great group of guys. They are good guys, that’s the most important. When the coach came to Milwaukee and met me, he said to me that he wanted to bring in players who are good kids first and foremost and then good players.

And also, they are amazing players. There’s definitely a switch from the older generation to the new generation, but I am not the most important guy in the team — obviously guys like Papagiannis, Printezis, Bourousis, Sloukas, Calathes, all the guys.

I can name everybody on this team. They are all really important, and they can contribute a lot to this team.

I think that we have no ceiling on this team. Everyone in this team is a great player. We have to continue to work hard. They play in big clubs, and they have a great experience. If we give 100%, we will be good.”

On a potential matchup against Team USA in the second round: “We don’t think about the USA team today. We have focused on the great win that we had, what can we do better. Our next opponent is Brazil. We got to focus on that game.

Team USA is far away. We got to take it game by game. And yeah, for the MVP? As I said I don’t want to be called that way, that’s in the past now.

Just respect the guys who go out there and play as hard as they can and do what I do since day one. That’s helping my teammates get wins. Do whatever it takes.

If that’s playing defense, or rebound the ball, or do whatever the coach asks me to do… dive for the ball? That’s what I do. That’s why I was named the MVP.” 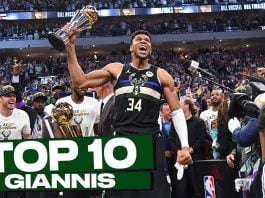