FIBA Europe announced on Friday that Milos Teodosic of Serbia has been voted European Player of the Year for 2010. The award winner was chosen by the public and an expert panel vote by media representatives and coaches, following a historically tight race that was only decided on the last day.

Teodosic was deemed second best by the experts, but was the overwhelming winner of the public vote and managed to snatch the award from the hands of 2008 and 2009 Player of the Year, Pau Gasol of Spain.

At club level, the 1.95m tall Serbian guard was named Euroleague 2010 Regular Season MVP, having averaged 13.4 points, 4.9 assists and 1.8 steals to lead Olympiacos to the Final Four of the competition.

The 23-year-old Teodosic, who had already been established as the star of his national team in EuroBasket 2009, was the driving force behind Serbia’s run to the 2010 FIBA World Championship semi-finals.

His incredible buzzer-beater in the dying seconds of the quarter-final victory over Spain achieved instant iconic status among the tournament highlights. He had 11.3 points, 5.6 assists and 3.4 rebounds per game in Turkey.

After congratulating Teodosic on the award, FIBA Europe President Olafur Rafnsson commented: “A quick glimpse through the names of the other candidates is enough to put the value of this award into perspective. Being voted European Player of the Year means that fans and peers consider you one of the best players in basketball history.”

“Sometimes I find it hard to keep in mind he is still only 23, so my initial instinctive reaction to the news was surprise that he had only been voted Player of the Year for the first time,” Mr Zanolin concluded. 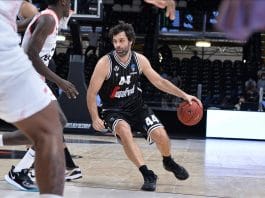