The sides met seven times last season, and will play each other at least as many times this year as they have been drawn together in the BBL Trophy semi-final, as well.

Eagles swept the BBL Championship series last season, and also won both legs of the Trophy semi-final on their way to winning the competition for a fourth time in six years.

However, Tigers have won the last three meetings between the clubs, knocking Eagles out of the play-offs at the semi-final stage and hammering them 80-58 in this season’s BBL Championship meeting.

However, Tigers shooting guard James Jones (pictured) isn’t reading too much into that early-season meeting: “We’re really looking forward to it. It looks like we’ll be playing them at least six more times this season, but when we beat them at the start of the season they didn’t have Trey [Moore]. He’s been doing well for them since then, winning player-of-the-month and he’s obviously helped them improve.

“But it’s the same group of guys, they’ll play hard, execute well, and Fab will have them playing tough defence. They have a lot of good shooters on the perimeter, and we need to remember it’s a two-leg tie. Tony [Garbelotto] always says we can’t win it in the first leg, but we can lose it.”

The Tigers added Great Britain point guard Nate Reinking to their roster a fortnight ago, and Flournoy believes that the veteran will strengthen the Mersey roster: “Nate is a systems based guy who is very solid fundamentally so I don’t think his introduction will change the way they play. It may make them even more efficient though!”

The sides meet again in the second leg next Wednesday, with the aggregate winner progressing to the final at the NIA on Sunday January 16.

Eagles coach Fab Flournoy is aware that two-leg basketball brings different challenges for his team compared to a normal tie: “It is always better to win a game rather than lose one but ultimately we have to be aware that this is an 80 minute basketball game and it won’t be settled until next Wednesday in Liverpool.”

Suns GM opens up about why his team couldn’t get Kevin...

Basketball legend Darius Defoe reveals the story behind his 18 year... 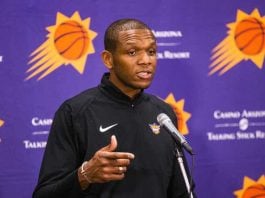