Thanks to a 31-48 run in the second half, Bayern Munich dominated Buducnost on the road (75-89) and maintained a play-off push.

The German visitors made a better start to the game (17-25), but the hosts came back and closed the first half in front by three (44-41).

Bayern, though, played excellent on both ends of the floor and outscored their opponents 31-48 in the second half to cruise to the victory.

Vladimir Lucic led the way for the winners, with 18 points and seven rebounds, as Danilo Barthel added 16.

On the other hand, Edwin Jackson scored a game-high 19 points for the losing squad.

Bayern Munich improved to 12-12, whereas Buducnost dropped to 6-18. 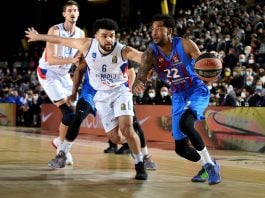