German clubs are adding the final pieces in the their roster-puzzles for the upcoming season as transfers of German internationals took place in the past few days.

Most notably Telekom Baskets Bonn agreed with 21-year old Tim Ohlbrecht, who is currently preparing with the German National Team, for the next two seasons. 211cm tall Ohlbrecht comes from Brose Baskets where he had 3.2 points and 2.4 rebounds in average, in the 2008-2009 Bundesliga. Additionally he scored 6.5 points and grabbed 4 rebounds per game of last year’s edition of the Eurocup.

New Yorker Phantoms Braunschweig also added their second German international in Yassin Idbihi who joins Heiko Schaffartzik. Idbihi, son of a Morrocan father and a German mother, was born in Koln/Germany and raised in Tangiers/Morocco before moving to the US to join the University of Buffalo. He is 206cm tall and 26 years old. He started last season with the Koln 99ers averaging 16.2 points and 4.8 rebounds in the first six games. Those numbers turned quite a few heads and led to his transfer to Limoges, where Idbihi had 7.3 points and 5.9 rebounds.

The Phantoms also added another big man in 32-year old US power forward Nate Fox who will be staying with the club for one season. Fox played for BC Kalev/Cramo Tallinn last season averaging 12.2 points and 7.1 rebounds in the Esthonian League.

Meg Gottingen sealed their roster with the addition of big man Chris McNaughton who comes as a replacement of injured Urule Igbavboa. 211cm tall McNaughton comes from the Spanish club Faymasa Palencia of the LEB Plata (Spain’s third division) with which he he achieved promotion in the LEB Oro having 10.4 points and 5.1 rebounds in average. 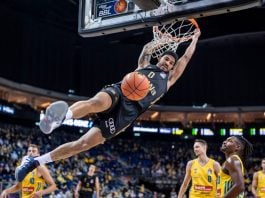 Basketball Bundesliga: FC Bayern Munich gets closer to the top of...