Blake Griffin played for the first time against his old team at Staples Center since the moment he was traded to the Pistons last January.

Ex-Clippers Griffin led the Pistons with a game-high 44 points (on 13/23 shooting, including 5/13 from three). In addition, he grabbed eight rebounds, dished out five assists, tallied three steals and blocked one shot.

During the pre-game, the Clippers owner Steve Ballmer tried to shake Griffin’s hand, but the Pistons’ forward run away from his former boss. After the game, Griffin explained the situation, by saying he didn’t ignore Ballmer and running straight to the locker room after the warm-up is his usual pre-game routine.

On the other hand, Danilo Gallinari was the top scorer for the Clippers with 23 points (on 6/15 shooting) and six rebounds, Lou Williams added 22 points, Montrezl Harrell poured in 21 points, nine boards and six assists. Five Clippers finished in double digits. Los Angeles made 9 on 18 three-point attempts. 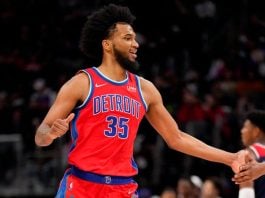