For the Nuggets, Nikola Jokic had his fourth triple-double of the season with 29 points (on 11/21 shooting, including 1/2 from three), 11 rebounds and 10 assists. Jokic made a clutch shot with 2.4 sec left and set the Nuggets’ victory.

Denver made 9 on 27 three-point attempts.

On the other hand, Dion Waiters returned to the lineup and led the Heat with 15 points (on 6/10 shooting), Kelly Olynyk (five boards) and Bam Adebayo added 13 points apiece, Hassan Whiteside poured in 12 points and 11 rebounds. Seven Heat finished in double digits. Goran Dragic missed the game due to a knee injury.

Miami made 8 on 31 three-point attempts. 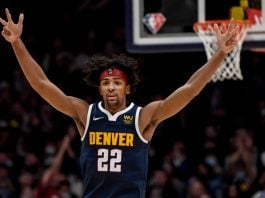