The Thunder’s center Steven Adams missed the game after feeling pain in his leg during the pregame warmups and Nerlens Noel took his place in the starting lineup. Paul George and Russell Westbrook both scored 23 points for the winners. Westbrook also grabbed 9 boards and made 7 assists, on 8-of-13 shooting, Nerlens Noel posted 20 points with 15 rebounds and 4 steals.

On the other hand, Elie Okobo (5 boards and 8 assists) and T.J. Warren each added 18 points, Deandre Ayton poured 16 points with 11 boards. The Suns missed their leading scorer, Devin Booker. 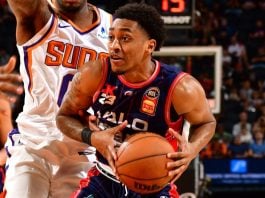