40-year-old the Dallas Mavericks forward Dirk Nowitzki and NBA Finals MVP (2011) is ready starting his game off the bench:

“I’ve always said the last few years, if it makes our team better – I want to be part of a winning team and if that’s what helps us win – then of course” – Nowitzki said.

“I have no problem with that. I already told (the training staff) if that’s the case, they better keep me loose. We better get a (stationary) bike ready somewhere because if I warm up and sit for 15, 20 minutes, that’s going to be an issue”.

The upcoming season will be 21st for NBA champion (2011) and Most Valuable Player (2007). Last season Dirk Nowitzki started mostly as the Mavericks center, but this summer Dallas acquired former Los Angeles Clippers center DeAndre Jordan who will obviously be the new center in the team’s starting lineup.

During his career Nowitzki started 1440 of the 1471 regular-season games and all with the Dallas Mavericks. The 13-time NBA All-Star will become the first NBA player who will represent the same team in 21 seasons successively. Last season Dirk Nowitzki was averaging 12 points, 5.7 rebounds and 1.6 assists per game. 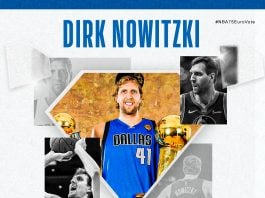 Dirk Nowitzki: “Players forcing their way out is not the way...